I fell in love with the Pebble Smart watch after reading Thejesh's blog about Pebble. I was about to get Pebble Steel, but that time they announced Pebble Time Steel with color epaper display and many more features. Now I am eagerly waiting for Pebble Time Steel :)

After seeing lots of videos and awesome watch faces, I wanted a watchface in my language. I created a sample app by embedding the Kannada Unicode font and ASCII font to test the Unicode support in Pebble. It has basic support for Unicode, but no support for complex rendering :( 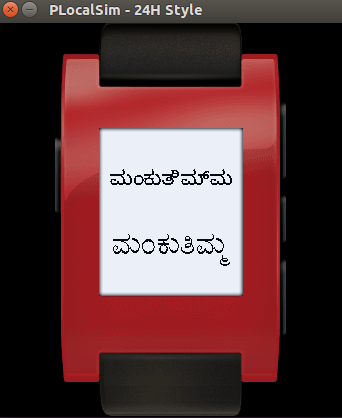 First one is Unicode and second one using ASCII font

I don't own Pebble yet, but published my first @Pebble app. Displays Time in Kannada language https://t.co/xhnPhHonpZ C&S Welcome. @thej

Thejesh installed app on his Pebble and shared screenshot, looking awesome in real Pebble. Fonts looking smaller than I see on emulator. Thanks Thejesh :)

. @aravindavk Good news the hack works. Kannada is tendered quite well. Blog about it. @Pebble pic.twitter.com/giPmQzzo5e

If anybody interested in this watchface, do try and let me know if useful. I have some plans to improve this watchface by adding animation on minute change and adding color for Pebble Time.

If you don’t know about Pebble, visit https://getpebble.com/ to know more.